With the release of iOS 5 came the long awaited ‘iMessage’ system. Enabling iOS devices to send and receive messages using data rather then the normal SMS network. This soon became a big challenger to the ever popular BBM.

Now Apple have taken it one step further, and released Apple Messages for OS X. Apple Messages is soon going to replace OS X’s chat client iChat. Not only is it capable of sending messages to iMessage capable devices, but I can also connect to AIM, Google Chat, Jabber, FaceTime and Bonjour.

What’s more, you can start an iMessage conversation on your Mac, and then take it mobile simply by continuing it on your iOS device.. Any messages sent in Messages for Mac show up in the iMessage app on your device and vice versa. Providing the perfect solution for those who want to stay in touch with their mobile contacts, but perhaps don’t want to have to keep picking up their device.

To get started with Messages for OS X you will need to download the client from Apple’s website or use this link. Once downloaded sign in with your Apple ID, Now on your iOS device, goto Settings > Messages and configure your device to also deliver to your Apple ID, and that’s it. The next message you send an receive will display on both your Mac and your iOS device.

Much like iChat the Apple Messages app features customisation options to truly personalise the look and feel, not only can you configure the balloon’s in the chat window, you can switch them from balloons to squares or compact chat windows. 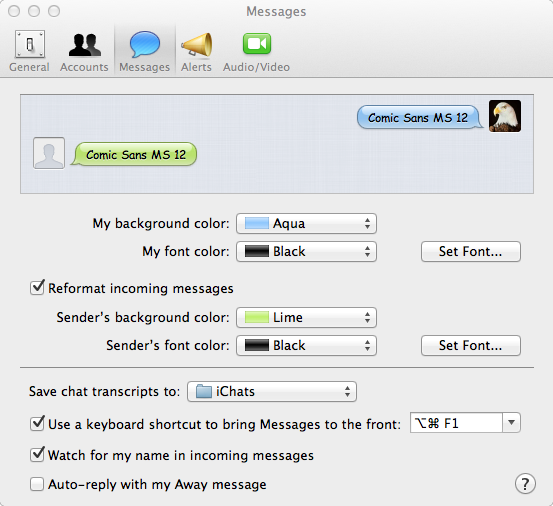 However, it may be worth noting – that once OS X Mountain Lion is released, the BETA version will stop working and the only way to continue using Messages will be to upgrade to Mountain Lion. So those of you who don’t like living life on the bleeding edge, you may find yourself growing to love Messages to then loose it again in summer this year!

Mike Hudson is a Lead Cyber Security Analyst living and working in Kingston Upon Hull. With extensive experience in Microsoft and Apple technologies, ranging from desktop OS’s to Server OS’s and hardware. By day working as part of an infrastructure team, and by night ridding the world of IT issues through blog posts..